The Art for Social Change Competition and Showcase includes four distinct categories for students to explore. New this year is the additional category of the Campus Civic Poet, which seeks to recognize a commitment to civic engagement demonstrated by a student poet.

Remembering MLK and Revitalizing the Dream

Submissions in this category commemorate the history of the Civil Rights Movement and the legacy of Martin Luther King Jr., and those that relate to the theme revitalizing the dream. 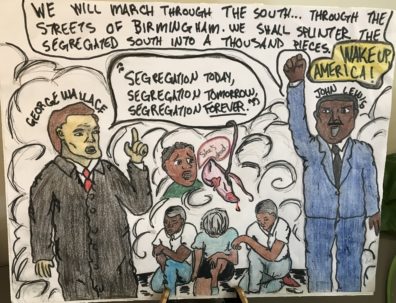 In this drawing, I did an interpretation drawing of the death of four little girls who died in the 16th Street Baptist Church bombing in Birmingham, Alabama. This drawing is inspired by the book series March by John Lewis and Andrew Aydin, illustrated by Nate Powell. John Lewis was a civil rights activist and is well known as a Freedom Rider and Student Nonviolent Coordinating Committee (SNCC) leader. George Wallace was the governor of Alabama and was known for supporting segregation. I wanted to show the violence of racism and how Wallace’s words can influence unjust actions like killing black children. I juxtaposed Wallace’s words with John Lewis, who wanted America to wake up to the injustice that surrounded everyone. Within this drawing, I illustrated the black community’s emotional response in the black freedom struggle: mourning, grieving, anger, praying, and pain. 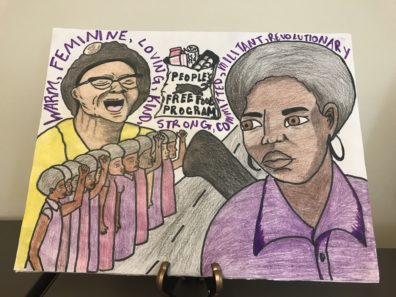 Black women were a key part of the Black Freedom Struggle. Too often black women go underrated for all the things they do for the struggle, and I hoped to highlight their significance in my drawing. Black women were organizing events, funding the movement, and protesting on the streets. Black women created the People’s Free Food Program, which is still used today in schools for students who need breakfast. In this drawing, I was inspired by several artist’s work seen in Ashley Farmer’s book: “Remaking Black Power, How Black Women Transformed an Era.” University of North Carolina Press. 2017, pp. 1-199. Farmer discusses how black women re-imagined their womanhood in the Black Panther Party. The definition of black revolutionary women: “She is the strength of the struggle…She is militant, revolutionary, committed, strong, and warm, feminine, loving, and kind. These qualities are not the antithesis of each other; they must all be her simultaneously” (Farmer, 67).

In honor of the civil rights movement, I dedicate this piece to inspire those to never stop dreaming.

Submissions in this category address contemporary issues of inequality and injustice at the local, national, or global level.

Kill the Indian Save the Man 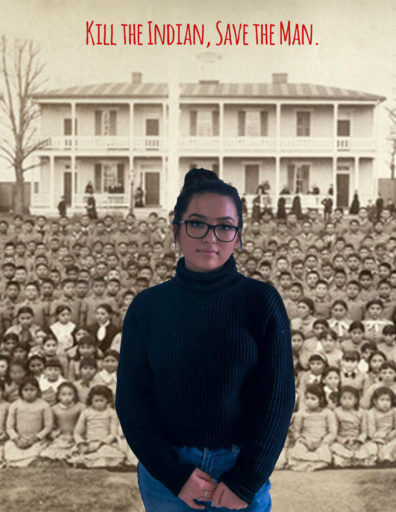 This saying is taken from the Kill the Indian and Save the Man speech that was given by Richard H. Pratt in 1892. Pratt is at the core of the development of Carlisle Indian School, the first boarding school on American soil. Boarding schools were created with the intent to destroy the Indigenous person and assimilate them into westernized society. Children were forced from their home and put into these schools were they were abused mentally, physically, and sexually. Their long hair was cut, their traditional clothing burned and they were beaten if they spoke their native language. This young woman in the photo is the granddaughter of a boarding school survivor, establishing a timeline which proves that these events did not occur long ago. I created this piece to demonstrate the resilience of Indigenous people, though they have been faced with genocide, forced assimilation, and current dehumanization through media presence, they still stand strong and continue to fight for the survival of the next generation.

Blurred Lines: Intersections of Gender Expression Across Class and Race 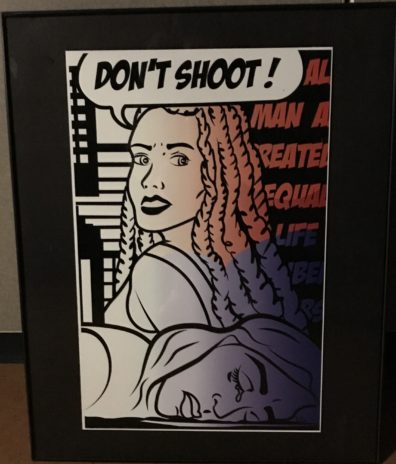 Unspoken Violence comments on police brutality and violence against women. This graphic is meant to portray injustice and lack of equity within our society which makes targets of women of color and leaves their stories unheard. 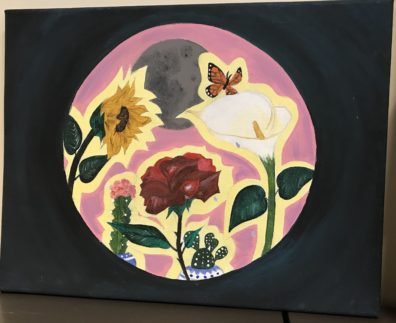 Garden of Dreams was created after the chaos of the 2016 elections. The elections occurred during my sophomore year as an undergrad. I was the social co-chair that year for the Crimson Group, which is an activist and support group for undocumented students and allies. As the many attacks towards our group occurred and our group tasks increased, the mental health of the co-chairs (including mine) began to decrease. Trump winning the 2016 election uprooted hate on our campus that was not felt before. My mental health state led to me stepping down from my leadership position in order to have the time to heal and recharge. My whole junior year I avoided many activist activities in order to rebirth the color in my life and regain my hope. I wanted to heal in order to obtain the tools to heal others. I began to paint colorful paintings such as Garden of Dreams. It is a representation of how I was stuck in a black hole of hopelessness, but once I took the initiative to heal, color began bloom back in my life. Each item in the circle symbolize a part of my resilient dreamer life.

This essay is intended to encourage individuals to examine their own knowledge and understanding of the legacy of state-sanctioned torture by the United States during the War on Terror, and to assess their own relationships with and obligation as citizens to this legacy through a critical lens. 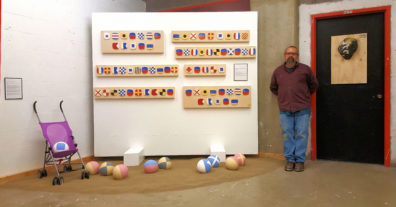 The Trump administration continues with its campaign of censorship and the dilution of basic human / civil rights. Resisting this effort to censor, I have created this ceramic installation voicing the seven banned words / phrases the Trump administration has prohibited officials at the nation’s top public health agency from using in official budget proposals. This action was reported by the Washington Post on December 15, 2017, in an article entitled “CDC gets list of forbidden words”, written by Lena H. Sun and Juliet Eilperin. The seven banned words / phrases are boldly and graphically expressed in the language of nautical signal flags, an international language of code currently in use by 170 countries. Seventy-one 4”x4” ceramic tiles are mounted on finely crafted wooden box frames, articulating the seven banned words / phrases; Fetus, Transgender, Vulnerable, Entitlement, Diversity, Evidence-Based, and Science-Based. Censorship in any form is inappropriate in a demographic society.

This piece is based on my own personal struggles as someone who is of multiple ethnicities. The struggle and the way I have overcome the beliefs I had in myself, to become the person I am today.

The Things That Make Me

This is an imitation of the poem, Where I Am From. The piece shows who I am as a person and the world I have been born into–through hardship and success. As well as the labels I have been given. 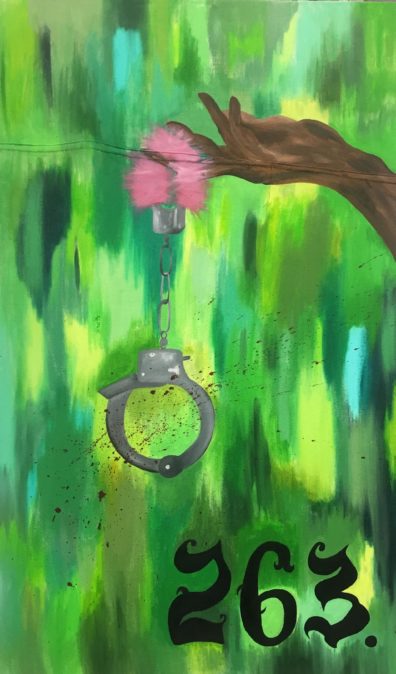 This work aims to reflect the disproportionate mistreatment and sexual harassment Black Women are submitted to specifically by police officers. ‘263’ reflects the amount of years Daniel Holtzclaw, a police officer, has been sentenced to prison for the assaulting of multiple Black women.

This work is how I interpret social justice and progressive movements. I hope this work will resonate with the reader and be taken to into action.

As a mixed Black woman on a mostly-white campus, I am constantly struggling with my identity and seeing myself represented on campus. I wrote this short piece after taking a course called Rhetorics of Racism, expressing my exhaustion after the semester. 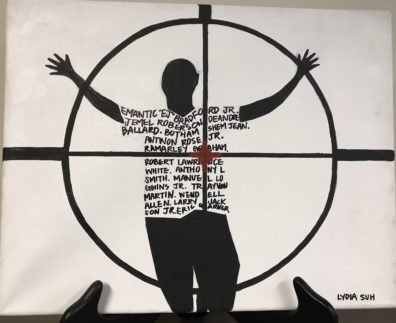 It happened then and it is happening now. 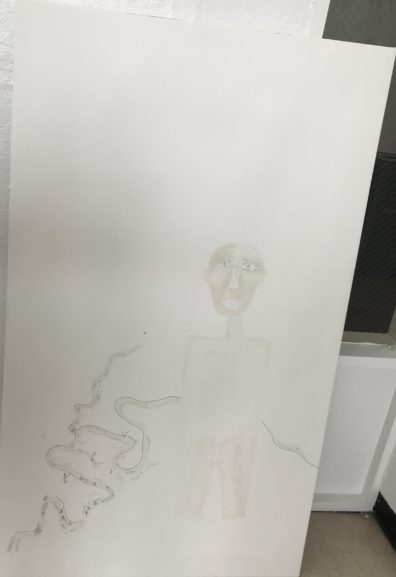 This work alludes to the concerns of the body and psyche as it relates to existing and interacting within a community. Traumas, travails, and the experiences of a journey are related to the viewer in order to convey a sense of despair, transparency, and ultimately acceptance of the human plight. The journey is one of both physicality as well as that of consciousness, and references to human rights and civil rights are apparent in the journey as well as the figure of the body.

Submissions in this category foster an inclusive community specifically at WSU.

A Collective Representation of the Intersections of Gender, Race, Class, and Education Among First Generation Students of Color at Washington State University 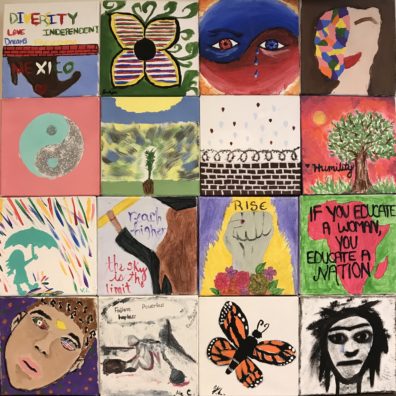 The inspiration for this work was born out of a class project tasking us to represent our understanding of the intersections of gender, race, class, and education. Given our current political discourse, there is a greater need for our communities to critically reflect on the aspects of life that make our work imperative to solve the challenges derived from a hegemonic, white-supremacist, and patriarchal system. MLK 19: Art for Social Change presents an opportunity for what Gloria Anzaldúa calls, “healing of the wound” as the starting point to begin addressing the issues that plague our world. Recognizing that before we begin to tear down the systems that for millennia have been set in place to disenfranchise those in the margins; we need to understand the ways by which we have been made to reproduce such system.

This art piece was created over the course of several weeks by first generation, students of color and their experiences with gender, race, class and education. Their individual representations were captured in a mosaic depicting these intersections living in the margins. They are honest reflections of a system plagued by obstacles yet, still offer a hopeful future where meaningful change can happen.

Submissions in this category celebrate civic engagement and the spoken word in the WSU campus community.

This work was inspired by my time at Washington State University. As an Indigenous woman I struggled with my identity the first year of college. It was a culture shock to attend a university and for the first time in my life I was the minority. Academics had me question everything about my people that I’ve been taught. There were days I left the classroom in near tears struggling to find my place. Then, my grandmother who was put in a boarding school for Native American children came to me in a dream. Since that moment I have made it a priority to uplift my Indigenous community and other minority groups on campus. This poem was to challenge and provoke others to not only maintain their identity but reclaim it.

The Dirt That Falls Beneath Your Fingers

This is a work of poetry that connects dirt to finding gender, self, authenticity, and anger. I unpack the understanding of finding gender, colonization, Blackness, Queerness, and Transness.

The intent of the poem is an alter offering for a former professor at WSU. It is meant to remind him that the ChicanX community still continues to do the kind of work he did when he was here.

A special thank you to the Department of Fine Arts and the MFA students who made this inaugural exhibition vision a reality to showcase our talented graduate and undergraduate students and their impactful artistic creations.