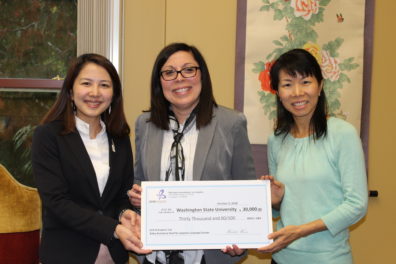 Before this position opening, only instructors Reho Abo and Niimi were supporting and teaching  verbal and written language skills. The new post will enable teaching of Japanese-specific culture courses that we haven’t been able to offer since fall of 2016, Niimi said. “The Japanese majors are growing [and] those students need to take the Japanese language courses as well as the culture courses,” she said.

The new grant is the first of its kind for Niimi, who previously was awarded grants of $700 once and $1,000 twice. The $1,000 grants helped with providing textbooks and other materials for her courses. The $700 grant helped fund an especially notable event organized by Niimi: a comedy performance by a world-renowned Rakugo artist.

Niimi began teaching Japanese language courses at WSU in 2008 and is currently serving as head of the Japanese program. This program is one of the many growing language programs in the School of Languages, Cultures, and Race. The program now offers a standard Japanese Language and Culture major, a Japanese for the Professions major (second major only), and a major and a minor in Japanese Language.