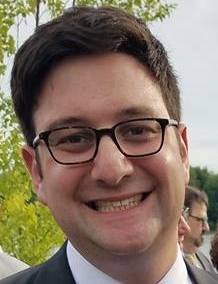 Samuel Ginsburg is an assistant professor of comparative ethnic studies; Spanish; and American studies and culture, whose research focuses on 21st-century Caribbean and Latinx science fiction. He joined the SLRC faculty in fall 2020.

You joined us right after the pandemic started. How did the situation change your expectations coming in as well as the way you prepared for the last two semesters?

Honestly, I have been really excited to join the SLCR! When I first visited WSU (days before the world shut down!), I remember feeling a sense of community and collegiality, so when everything went online, I didn’t know what to expect. Even though it’s taken a different form than what I had envisioned, I have felt really welcomed. I am so grateful to everyone who helped me through this first year and made it such a meaningful transition. Preparing to teach entirely online was a challenge at first, but I was lucky to have so many great students who cared about the courses and made signing on to Zoom every day much easier.

In spite of it all… what are some highlights of your first year as an assistant professor at WSU?

The highlights have definitely been all my interactions with my students. This has been such a hard time for so many people, but both the undergraduate and graduate students really blew me away with their work and perseverance. One thing that will definitely stick with me is the memory of watching my spring 2021 Latinx politics class present their final projects. They developed detailed plans for “Centers for Latinx Politics” that engaged with the community and included historical and cultural components. It was impressive seeing how much they took away from our class discussions and how much of themselves they put into their projects.

When did you start learning Spanish? Do you remember the moment when you realized that you wanted to pursue it at university?

I took Spanish all through high school but majored in English as an undergrad at the University of Pittsburgh. It wasn’t until I accidentally took a class on post-Boom literature in translation that I became interested in reading more about Latin America and the political potential/consequences of literature. After that, I studied Spanish through formal classes and living in Argentina until I got my abilities up to a point where I could read and write about the literature in the original language. Part of what I love about studying Spanish is that it always feels like a challenge. It’s an ongoing process and I never feel like I am “done” learning.

You did your MA and PhD in Latin American literatures and cultures; what drew you to them?

I was drawn to the possibility of making connections between so many things that I find interesting: history, politics, theory, sociology, literature, etc. I started out in my master’s studying Argentine literature, specifically Julio Cortázar’s connection to Cuba and the Cuban Revolution. That allowed me to spend time in the archives at the Casa de las Américas in Havana, and all of the conversations I had during and after that trip made me switch my research topic to Cuban literature. I eventually expanded my focus to include Puerto Rico, the Dominican Republic, and the Caribbean diaspora, since it was so interesting to see how their respective histories and literatures were shared but also very particular, and then how those histories were reflected in literature from those places. I’ve been lucky to have many great advisors, mentors and colleagues along the way who have helped me do this work respectfully and ethically.

Your research focuses on science fiction, which some people might be inclined to take not too seriously. Can you explain how science fiction is a relevant way to explore real social issues?

I think that the fact that some don’t take science fiction seriously is kind of the point. I always say that my students start out thinking they are discussing fun stories about aliens and robots, but then, before they know it, we are getting into issues of colonialism, resistance, and humanity. It also helps that science fiction authors (especially the ones I study) are not very subtle about their politics. One great example is Dominican author Rita Indiana’s La mucama de Omicunlé (2015), which speculates on the future of queerness, Afro-Caribbean religions, technology, war, environmentalism, and the art industry. You can do a lot when you aren’t bound to realism or linear time!

How is teaching literature different from teaching comparative ethnic studies (CES), and how are these two subjects similar?

They both have their particularities, but I often think about the primary material in my courses as a bridge to the larger issues that we want to tackle. If my students don’t remember a single story/article/film from class but feel like they have developed the vocabulary to go out into the world and have informed conversations on difficult topics, then I consider that a success. I think that can be achieved through literature or through the kinds of sources we analyze in CES or American studies courses.

It opens up your world so much. I am so thankful to all the people I have met and the deep connections I have formed because of Spanish. I also think those possibilities are good motivation to stick with it. It is easy to get weighed down by the hard times, conjugation tables, and embarrassing mistakes (we all make them!), but reminding yourself about what you can do and all you can learn with a second language like Spanish can help you push through the more frustrating moments.

What about CES? How do you think it might benefit students to take CES courses?

I love our CES program here at WSU because it really forces students to think critically about the world around them. My biggest advice for CES students is to always keep in mind that what you are studying relates to what is happening right now. We need more critical thinkers, we need more empathy, we need more people pursuing justice and dismantling violent structures and institutions, and I think CES courses help you prepare for that hard work.

What are you researching at the moment?

I’m currently finishing up my manuscript on representations of bodies and technologies in recent Caribbean science fiction. It’s been a fun project, but I am ready to put it out into the world! I also have a few shorter projects brewing, on topics like alien sexualities in Cuban science fiction, autobiographical writing that pushes the limits of reality, and technocolonialism and street art in Puerto Rico. For my course in the fall, I’ve also been researching Latin American climate fictions and eco-criticism. I’m having a lot of fun with it, and look forward to sharing it with students!