The Art for Social Change competition is organized by the School of Languages, Cultures, and Race every spring. Despite various restrictions from the pandemic, the competition went ahead, serving as further proof of our students’ resilience and motivation. Although we could not organize a showcase to celebrate our awardees, you can see their winning pieces and read about what inspired them, below.

We are already looking forward to the next ASC competition in spring 2022! If you would like to enter your artwork, check out the submission guidelines.

This award is given to artworks that address contemporary issues of inequality and injustice at the local, national, or global level.

Silva’s piece Technophobia attempts to spotlight automation and the rise of skill-bias across undocumented immigrants and lower-skilled workers. It refers to the fear of advanced technology, which is contingent on one’s state of mind. The two canvases are painted in monochromatic hues with enhanced color detailing humanity. The phrase “it’s all in your head”, is often echoed to deflect the reality of unskilled segregation in the labor force. “Dreaming was my crime” refers to undocumented immigrants who arrive in the United States looking for jobs that they will not be able to find and who are labeled as criminals for their dreams. Both phrases are painted using crackle medium which is intended to age and dim the content of the phrases. Autonomous mechanisms shown in both paintings use acrylic gel transfer techniques to reflect a static element.

Wildeman’s piece is titled Mujer de las mariposas, and it is a deeply personal piece. She explained: “This piece is social justice in action. Creating a narrative for mixed-race individuals and interracial relationships. The complementary colors play off each other’s intensity, creating an especially cohesive piece. This represents the intensity of two cultures and two people coming together cohesively. The woman in my portrait is my partner. As a Cuban and Mexican woman, there is vulnerability as a mixed-race person. Together we are exploring the many sides of the vulnerability of being in an interracial relationship. The butterflies are not only beautiful but represent the mystery of change, transformation, and vulnerability in life. The pasting on top depicts how new and prevalent these vulnerabilities are to us. My artwork not only speaks for my partner and me but for others who are faced with these vulnerabilities.”

McNeil’s artwork, Together we are powerful, was inspired by events of 2020: “I believe [that] after the year we have had, we need to come together to be united.” 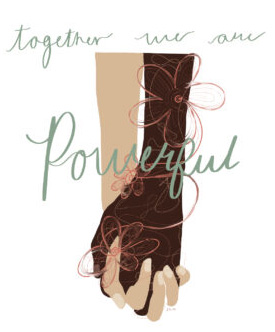 This award is given to an artwork that fosters an inclusive community at WSU.

Mendez’s piece is titled Imposter-Girl. In the artist’s words: “The girl in this painting believed herself to be an imposter. She never believed that she could succeed in a country that wasn’t hers. Regardless of her intelligence and achievements, she never deemed herself capable of success. In the painting, the imposter appears to be in a depressed state because she feels alone and unworthy. She didn’t believe that anyone like her could ever attain success. I, however, believe that I can accomplish anything I set my mind to because I am worthy of success. I believe that I have the capabilities to break through boundaries and face adversity head-on. The reason why I feel this way is because the community that I’ve made at WSU has helped me understand my worth and establish my place in society. The welcoming community at WSU has also helped the girl in the painting go from an imposter to me.”

This award is given to an art work that builds bridges between WSU (or the WSU community and individuals) and other communities.

Led by teacher Desiree Gould, Franklin Grade School students created this fantastic piece titled Everyone Deserves a Home. According to Gould, “Homelessness can reflect biases and injustices present in communities. All students in the Pullman School District were invited to create artwork for a combined mural emphasizing that everyone deserves a home.”

After having to cancel the series in fall 2020, we were able to resume the lectures virtually in spring 2021.

Our first lectures focused on nature and humanity. 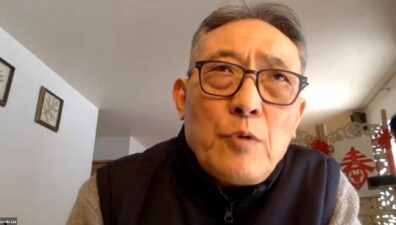 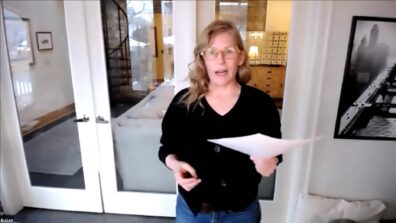 Our second virtual installment of the SLCR Lecture Series addressed the topic of race and family from two very different perspectives. 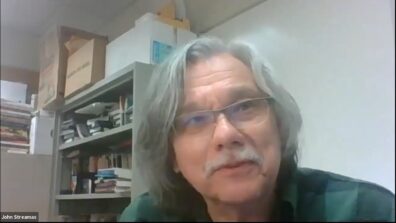 John Streamas, associate professor of comparative ethnic studies (CES) and American studies and culture, WSU Pullman, presented “Dis-Integration: A Futureless History of Nuclear Families of Color,” about nuclear war’s implications for global race relations, especially as it places gloomy prospects of no future against the hopes of an anti-racist future. 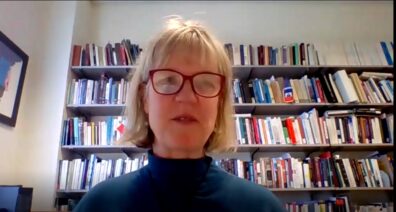