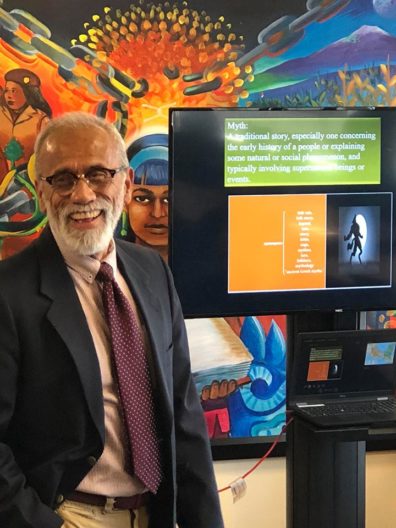 On Sept. 25, Spanish Professor Francisco Manzo-Robledo talked about Maya and Aztec myths for Latinx Heritage Month. Manzo-Robledo, professor of Spanish and graduate director of Hispanic Studies, brought the historical context of how the myths were formed and the truths that lie behind them. The myths he chose were about the colonization of Mexico when the Spaniards came in 1519, he said. “The truth is always relative,” he said. “Some of these [myth] things are convertalated on truths.”

In 1519, the Aztec and Inca empires were the largest ruling societies and the Mayan empire was gone, Manzo-Robledo said. There is a myth that the Aztecs were defeated by a few Spaniards even though the Aztec had a big amount of warriors that should have easily diminished the Spaniards, he said. “What I say is that the conquest of the Aztec empire was done by Indians led by Spaniards. In the case of the Incans, it’s proven that the largest battles were indigenous people fighting against each other, led by the Spaniards.”

Manzo-Robledo pointed out that Mexico experienced more than one conquest, including the Aztec conquest. There was a military conquest and the spiritual conquest, which changed their religion and culture, he said. Another historical myth was how the Aztecs moved from the North part of Mexico to the center of Mexico. According to myth, Aztec people moved to central Mexico because they saw the sign of a cactus plant with a eagle perched atop, eating a serpent. This image can be seen on Mexico’s flag today.

Aztecs were known as a warrior tribe, which meant that they lived in the worst lands before they could dominate land that was better. The worst lands were within what is known as Mexico City today. The city was originally a lake, and the Spaniards said it looked like Venice, Manzo-Robledo said. He believes that events such as his presentation about historical myths and other discussions of Latino culture for Heritage Month are important because they bring to light Latino culture, history, and the way the Latin world functions. The seminar discussions in Latinx Heritage Month are upholding the idea that diversity matters to WSU, he said.

“Diversity is something that is the future and we cannot close the doors to that,” he said. 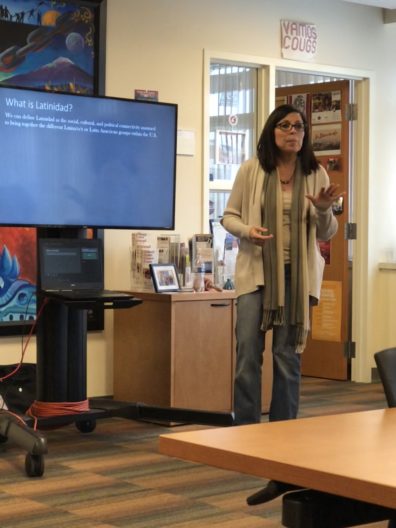 On Oct. 9, Director Carmen R. Lugo-Lugo spoke about how Latino pop culture affects the perception Americans have of the Latino community. “People tend to overlook pop culture, or trivialize its effect, just because it’s pop culture. [Pop culture] is a song, television show, film, so it’s not taken seriously,” she said. “To me, those things are serious in how they affect our views about groups and individuals.”

Pop culture can be defined as cultural practices and artifacts that are “produced, accessed, and consumed by the masses,” such as written works, art, music, film, television, or other online media, Lugo-Lugo said. When she looked closer at Latino/as represented in pop culture through the 1980s to present day, she found that Latino/as fluctuated in how they were represented in film and television.

She began studying Latino/as representation in the 1980s because the U.S. then began to notice that a growing Latino population existed in the country. Before the 1980s, the U.S. was concerned about the Soviet Union instead of their own internal groups. In the 1980s, Latino men in film and television shows were portrayed as police officers or criminals worthy of imprisonment. Moving forward a decade, Latino/as men and women were completely removed from film and television shows. “You wouldn’t find a Latino if your life depended on it, looking at shows [in the ’90s],” Lugo-Lugo said.

During the ’80s and ’90s, states were making initiatives to deny immigrants the right to attain healthcare and education. The lack of Latino/as representation in film and television shows correlates to how Americans viewed them during this time of history. “It’s important to pay attention to the events that transpire in popular culture along with the artifacts that are created like the shows, films, and music,” Lugo-Lugo said. By the very end of 1990, Latino and Latina roles flooded onto the big screen and television shows. Latino men could still be seen as criminals or cops, but now, other roles were offered too.

Lugo-Lugo also spoke about the Latino and Latina celebrities and actors from 1980 to present day, because celebrities and actors reflect pop culture. Her talk about Latino Pop Culture was important to Latinx Heritage Month because it illustrated how Latino/as identity has been portrayed in media overtime. Latinx Heritage Month is about accepting Latino presence on campus and affirming Latino identity.

“I think it’s important for Latino/as in heritage month to affirm themselves in the eyes of others, claim space on campus, and show that this is who we are as a country,” Lugo-Lugo said.