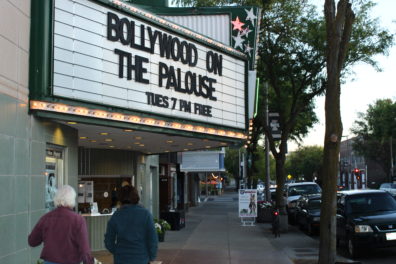 In September, the Palouse community members filled the Kenworthy Performing Arts Centre in Moscow, Idaho, every Tuesday night to celebrate and enjoy Indian culture through film. Lipi Turner-Rahman, Kimble Collection Project manager for WSU Libraries and instructor of two India History courses, organized the Bollywood film festival as a “labor of love,” she said. This is the second time Lipi has created this event to provide a place to learn more about Indian and South Asian culture for free.

India is the second-largest population in the world and continues to grow its influence in the world today, Lipi said. Gaining a passing knowledge of India and South Asian culture is key to understanding the state of the world politically, economically, and socially, she said.

It is difficult to bring the culture, language, and history of India to the Palouse, but Bollywood films are “sort of like a mini study abroad,” she said. Upon the first showing, the community praised the film with a sold-out show. Lipi chose an array of movie topics after deciding which Bollywood movies were most popular in India and South Asia. She wanted to showcase the films that appeal and pull in South Asian audiences. She presented the films: “3 Idiots”; “Raazi”; “Padman”; and “Dilwale Dulhania le Jayenge.” The first film is a comedy about two best friends who searched for their long-lost college friend. “Raazi” is about a Kashmiri woman who is a spy on Pakistan during the 1971 Indo-Pakistan war. “Padman” is about a pioneer of menstrual pads who seeks to make pads inexpensive for women in rural India. The last film is a love story where the lovers meet in Europe and fight for their love when they go back to India.

“When people get to see a different world and a different culture, they actually realize that people are sort of the same all over the world,” Lipi said.

People all over the world can have the same concerns, it just may look slightly different depending on the place. Seeing another country’s concerns through film you can make a people to people connection, she said.

In Washington, many South Asians work in Seattle’s technology companies, such as Microsoft, Amazon, and Google. Although not all South Asians within those companies enjoy Bollywood movies, these films do bring traditions, food, and a new way of life that South Asians have experienced. Viewing these movies is important because it makes local South Asian culture visible to the Palouse community. The community continued to experience culture from around the world on the big screen for the month of October. Sabine Davis, clinical associate professor of French, in conjunction with Sarah Nelson, French associate professor at University of Idaho, hosted a French Film Festival the first four Tuesdays of October also at the Kenworthy Performing Arts Centre.