The Palouse French Film Festival is about to present its 12th edition this October at the Kenworthy Performing Arts Centre in Moscow, Idaho. Here is the line-up for this year’s edition:

Films are in French with English subtitles.

For more information about the theater, check the KPAC website.

A little bit of history

This event was initiated through the collaboration between two French Professors: Sarah Nelson from the University of Idaho and Sabine Davis from Washington State University. After receiving a grant from the  Cultural Services of the French Embassy and the French Ministry of Culture in 2010, the festival made its debut on the Palouse, featuring recent French and Francophone films in French with English subtitles.

After receiving the grant for five consecutive years, the festival became an independent university event funded by the yearly financial support from both Washington State University (WSU) and the University of Idaho (U of I). In particular, the School of Languages, Cultures, and Race and the College of Arts and Sciences at Washington State University and the Department of Modern Languages & Cultures  and College of Letters, Art &Social Sciences at the University of Idaho were generous loyal donors to the festival. These institutions combined with other units at both universities, as well as personal donations from community members have contributed over $33,000 to this local film event.

The purpose of the festival was and still is two-fold: to bring French cinema to the Palouse and to offer an insight into French and Francophone culture to the students and community members in the region. Over the past twelve years, the festival has featured a total of 48 films delving into a variety of societal topics such as history, arts, gender relations, immigration, homelessness, racial tensions, religion, death, family dynamics, friendship, and love through the interpretive lens of French, Canadian, Belgian, Senegalese, Mauritanian, and Chadian film directors. Insightful introductions of the films by university faculty and community members, as well as academic discussions in classes on both U of I and WSU campuses, have provided a stimulating context in which community members and students can learn about another culture and reflect on their own.

With a total audience of over 7000 from its inception, the Palouse French Film Festival has become the highlight of the Pullman and Moscow cultural calendar in the fall! 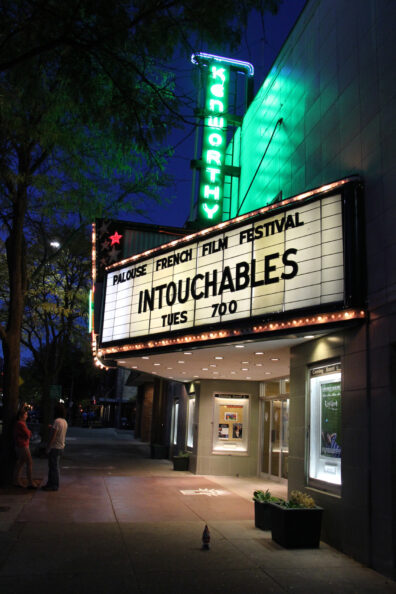 At the University of Idaho