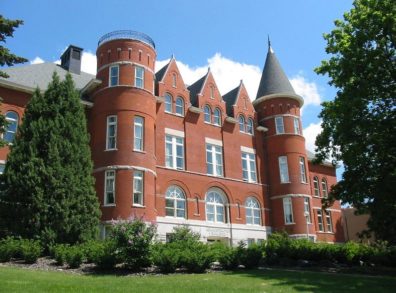 Washington State University offers a doctoral degree in American Studies and Culture. Students in our program explore interdisciplinary analyses of the United States as a multiethnic, multiracial, multigendered, and multicultural society shaped by transnational forces.

The American Studies and Culture graduate program at WSU was founded in 1962 and is one of the recognized leaders in this field in the Northwest. Since its inception, it has continued to offer a rich, rigorous approach to analyzing American society, culture, and history, combining the best intellectual insights from different fields and disciplines. As an inter- and transdisciplinary field, American Studies at WSU offers particular strengths in textual analysis, race and race relations, diaspora and nationality, gender and sexuality, popular culture, and linguistics.

In addition to taking our own American studies courses, students can take graduate courses in other departments across the University and synthesize these into their programs of study.

While most of our graduate students enter careers in university and college teaching, an advanced degree in American Studies can also be utilized as a useful preparation for community activism, museum and archive work, traditional and electronic publishing, and government service, among other careers.

The core faculty in the American Studies and Culture program has strengths in the following areas: critical analyses of race and ethnicity; cultural studies; diaspora and nationality; empire; eco-critical studies; food justice and sovereignty; gender; literatures; popular culture; theories of the body; and cultural texts and linguistics.

Joshua Bonzo’s research interests focus primarily on foreign language writing and how output is influenced both autonomously as well as by instructional convention. His studies include extensive backgrounds in second language acquisition and foreign language pedagogy. Bonzo is also deeply interested in comparative and historical Germanic linguistics. His publications have focused most recently on both student writing production and teacher writing training and methods.

Samuel Ginsburg specializes in 21st century Caribbean and Latinx science fiction, looking at how authors, filmmakers and artists have negotiated histories of techno-colonialism and techno-authoritarianism. He also does research on Afro-Futurism, Cold War rhetoric and literature, eco-criticism, and the intersections between technology and popular culture.

Michael Hubert’s general areas of research interest include second language acquisition with special emphasis on language production, second/foreign language teacher training, Spanish phonetics, phonology and dialectology, Spanish applied linguistics, translation studies, and the teaching of translation in society. Professor Hubert’s current projects include a longitudinal study of the development of foreign language speaking and writing proficiencies among university students, a survey of foreign language learner avoidance strategies and the instructor practices that enable this behavior, and a study of the reasons why foreign language students abandon their studies before completing the university major or minor.

Xinmin Liu’s teaching and research deal with subjects of ethical, aesthetic, and environmental importance. His book on themes intersecting personal growth, education and ethnic and cultural identities of modern China is under contract with Brill. He has lately undertaken ecocritical studies of literature, art, and culture in the context of global development. His recent publications have focused on the processes interfacing the human subject with local communal living and biophysical environs.

Carmen R. Lugo-Lugo’s research and teaching interest areas include Puerto Rican and Latina/o studies, race and gender in popular culture, Latina/o literature and constructions of ethnicity and gender, colonialism/imperialism and empire, post-9/11 cultural and rhetorical productions, and race relations in the United States.

Vilma Navarro-Daniels’s research interests focus on the relationship between political, social, cultural, and economic transformations and their literary and cinematic representations. She has published on Peninsular Spanish novel, short fiction, film, and theater, as well as on Latin American film and television. Her approach to cultural products includes theories about gender, ethnicity, human rights, religion, dictatorship, transition to democracy, and late capitalism, among others.

Alejandro Ramírez’s research agenda examines migration and diaspora in urban literature and culture in Mexico, Latin America and U.S. Latinx communities in the twentieth and twenty-first centuries. He scrutinizes how urban narratives (literature, graphic novels, films, music and public art) portray migratory flows of people and ideas in the city, crisscrossing the political limits of nation-states, creating transnational geographies and cross-border environments in the historical period of global neoliberalism.

R. Xach Williams’ research interests include the material conditions of anti-black racism, segregation exclusion in the Pacific Northwest from the mid-nineteenth to the mid-twentieth centuries highlighting the contributions of Black communities to the development of the PNW overtime.

Ph.D. in American Studies and Culture