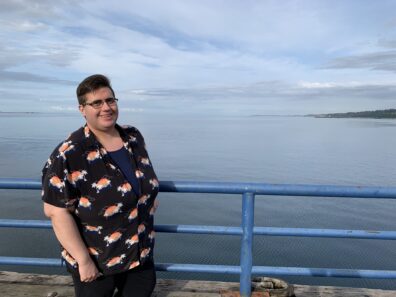 Raymond Lindquist (they/he) is a lifelong PNW resident and a doctoral student in the American Studies and Culture Program here at Washington State University. After initially starting his academic journey as a journalism major, he found that his academic interests went beyond what he could cover in newsprint, and decided to pursue his longtime passion for research and pedagogy instead. He went on to earn his Bachelor of Arts from The Evergreen State College in Cultural Studies, and his Master of Arts in Cultural Studies from the University of Washington, Bothell.

For his bachelor’s degree, his research interests centered around Asian-American and East Asian culture, history, subcultures, and popular culture, culminating in studying abroad in both China and Japan. During his Master’s, he used this as a basis to investigate the potential of narrative-based interventions for misinformation spread, and gender norms within extremism. For his Ph.D. work he plans to build upon this research, as well as analyzing power and gender within popular culture, and related subcultural groups.

In his spare time, his hobbies consist of nature and wildlife photography, playing video games, and recreating foods from his favorite film, game, and television franchises.