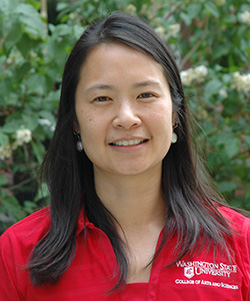 Born and raised in Taiwan, I began learning the English language at the age of 12 when I moved to Honolulu, Hawaii. Having personally experienced the struggles as a second language learner, I wanted to reach out to students who face many obstacles in schools and society due to language barriers and racism. I graduated from University of California Berkeley with a B.A. in ethnic studies and a minor in education. After college, I worked as an English as a Second Language teacher at the elementary and local adult school in San Jose, California.

In 2002, I moved with my husband to Pullman, Washington, where I completed my master’s degree in education. While I initially focused on deepening my knowledge of second language acquisition, my primary research interests involved media literacy and issues surrounding popular culture, race, gender, and sexuality. After receiving my M.A. in 2004, I started advising for the General Studies Program in the College of Liberal Arts at WSU.

As an academic advisor, I’ve presented at local symposia, published articles for the National Academic Advising Association (NACADA), and received academic advising awards from WSU and NACADA. I enjoy working with students and helping them achieve their goals in life.

I’m a mother of two (Rea and Sam), and when I’m not occupied with kids and family, I enjoy reading, gardening, and traveling. I also enjoy running and regularly practice yoga.

“In Times of Budget Cuts: Difficult Issues and Possible Solutions”
“Ni How: What Academic Advisors Can Do To Better Serve Students from China”
“Race, Racism, and International Students in the United States”
“Asian American Athletes in Sport and Society” (Chapter 10)