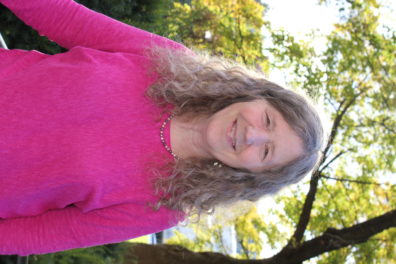 Karen has spent her career teaching language and has worked in the field of language acquisition since 1983. Her work has included teaching German and English-as-a-Second-Language (ESL) and providing speech/language pathology services to children and adults.

Karen completed an undergraduate degree from Lewis and Clark College in German and History. She participated in a five-month study abroad program in Austria in her freshman year and spent her senior year with a program at the Ludwig-Maximillian University in Munich, Germany.  After graduating, she worked at a ski resort in Mürren, Switzerland.

In addition, Karen earned an M.A.  in Speech-Language Pathology from Portland State University and worked as a speech-language pathologist in public schools and hospital and rehabilitation settings for ten years before turning to the field of ESL.  She received her second masters, which was in English Education with an emphasis in TESL, from Temple University in Philadelphia and taught ESL for 25 years, mainly at the Intensive American Language Center (IALC) at Washington State University with two years at Santa Barbara City College.  While at the IALC, she served as the professional development coordinator for eight years and coordinated an annual winter program of Japanese students from Kansai Gaidai University for thirteen years. During her time at the IALC, she presented at several professional conferences.

In addition to her K-12 teaching credential in Speech-Language Pathology and ESL, she holds a credential in German. In 2008, along with working at the IALC, she started teaching first year German with one course per semester at the University of Idaho. She taught German 101 at WSU for three semesters from 2013-2015.  Then in the fall of 2016, she began teaching German full-time between the two universities.  She thoroughly enjoys this opportunity to share her passion and knowledge of the German language and culture with her students.

Karen served as the chair of the Undergraduate Curriculum Committee for the Department of Foreign Languages and Cultures at WSU from 2016-18.  From 2016-17, she was a member of the Publicity and Marketing Committee, and from 2017-18, she served on the Foreign Languages Day Committee.

In 2017 Karen received a grant from the Goethe Institute to participate in a two-week summer seminar in Leipzig/Munich along with 24 German language educators from 18 different countries.  She gained invaluable cultural and historical knowledge regarding the former East Germany and its path from reunification to the present, which she readily shares with her classes. She also returned with a wealth of ideas for conveying cultural information in language courses and presented this information at a regional conference in October 2017.

Karen’s main professional development interests include developing a variety of ways to increase active participation in the classroom as well as helping students to guide and monitor their own learning.  She attends conferences, workshops, and reads professional literature with these goals in mind.