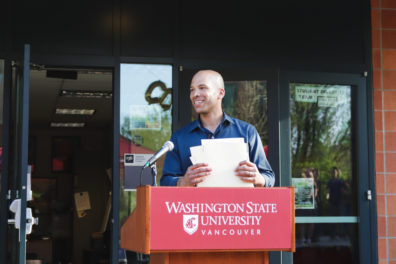 Originally from Minneapolis, Sky Wilson has lived in Washington since 1995, and has been a member of the Clark County community since 2007, when he moved to Vancouver to teach and finish his degree at Washington State University. For nearly two decades, his research and work has focused on community organizing, and local communities creating alternative community-based structures. He has worked both in academia, and with grassroots or community organizations serving multiple roles including labor organizer, faculty member, and center coordinator. He earned his Doctorate in American Studies from Washington State University in 2016 and currently works as the Manager of Equity Initiatives for Southwest Washington Accountable Community of Health.